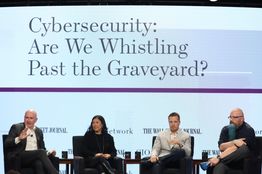 Companies Are Seeing How Vulnerable They Are to Hacks

George Kurtz, Chris Roberts and Theresia Gouw talk about the state of security and what comes next.

The Rise of the CIO in the C-Suite

Vinod Khosla says chief information officers are positioned to take the lead on some of the biggest challenges companies face.

The Key to Increasing Corporate Diversity

Business Lessons From the Basketball Court

Bob Myers, general manager of the Golden State Warriors, talks to Jason Gay about what it takes to build a winning team.

Chris Liddell on how the administration is working with the private sector to enhance cybersecurity.

How Artificial Intelligence Will Transform Business

Aaron Levie of Box Inc. and Stacy Brown-Philpot of TaskRabbit offer their take.

The Cost-Cutting Potential of Blockchain

Michael Casey and Caitlin Long on how blockchain can make a lot of industries much more efficient.

Reddit co-founder Alexis Ohanian on why he’s investing in technologies that will give users more control over their data.

The Growing Role of the CIO

Ben Fried of Google and Prof. Vijay Gurbaxani on the responsibility of the CIO to keep up with fast-changing technology.

The Next Big Things in Business Computing

Lyft’s Jill Wetzler on the Challenge That Keeps Her Up

The chief technology officer explains why you probably won’t be buying one.

The Fight Against Nation-State Cyberthreats

Michael Chertoff and Bob Lord lay out the kinds of attacks companies should worry about—and what they can do about them.

Where the Cybersecurity Threats Are

Stephen Schmidt of Amazon Web Services and Scott Smith of the FBI talk about what companies should be most concerned about.

What Corporate Boards Need to Do About Cybersecurity

Why We Have to Really Worry About the Banks’ Cybersecurity

George Kurtz, Elena Kvochko and Joe Leonard on the risks to financial institutions—and the worst-case scenario.

The Inside Story of When Verizon Learned of the Yahoo Breach

The Cybersecurity Risk From the Internet of Things

Inside the Mind of a Hacker

Chris Roberts knows how they think, because he is one, and he has some security tips for companies.

Cybersecurity in the Trump Era

It isn’t much different than under President Obama, say Gregory Touhill and Christopher Krebs. That says a lot about the issue.